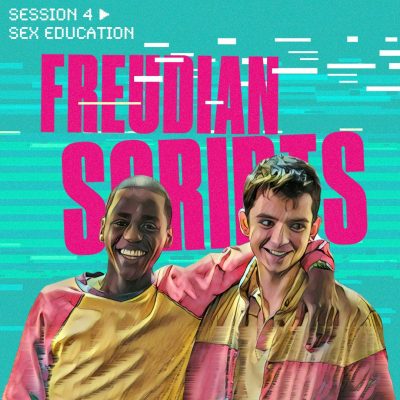 In Session with “Sex Education”

Have you ever been part of a “therapy” session in an abandoned, high school bathroom? Hopefully not! This week Dr. Sam and Dr. Fran tackle sex therapy, adolescent development, and mental health in LGBTQ+ youth while discussing Netflix’s Sex Education.

In this week’s session, we evaluate Otis Milburn’s skills as a sex “therapist” and dive into the various situations in which he finds himself. And wait, should Otis even call himself a therapist? Maybe he should stick with “sex kid” and leave the therapy to his mother, an actual licensed psychologist. Unsurprisingly, this week’s “therapy” portrayal leads to some new and interesting PhDon’ts.

In honor of Pride, Dr. Sam and Dr. Fran discuss mental health in LGBTQ+ youth, sharing statistics from The Trevor Project. We also look at adolescent sexuality, gender identity, gender expression, and intersectionality through the lens of Eric. Raise your hand if Eric is your favorite character on the show!

This week’s session runs slightly over time, but do not worry—we won’t bill you for it! Our session on Sex Education discusses important topics that we wanted to make sure to cover and who knows, maybe it comes back for a follow-up session in the future!

Jargon – specialized terms used within a profession (e.g., psychology) that are less well-known among the general public

Sexual orientation – one’s emotional, romantic or sexual attraction towards others

Gender identity – one’s inner concept of self as male, female, both, or neither, can be the same or different from the sex assigned at birth

Intersectionality – the overlap between different identities (e.g, race and sexual orientation) and the idea that this overlap leads to unique experiences of discrimination and privilege

Nonbinary – describes someone who does not exclusively identify as a man or woman, they can identify as both, a combination, or something outside of these categories

We talked about some really great resources from The Trevor Project in this week’s session.  Read more about their National Survey on LGBTQ Youth Mental Health and the different services they offer for LGBTQ+ youth.

Learn more about the adorable (and useful!) Gender Unicorn

To see five minutes of Eric laughing at Otis, watch this video