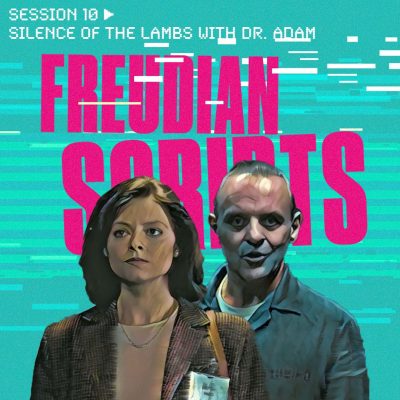 In Session with “The Silence of the Lambs” with Dr. Adam

Hello, Freudian Scripters. This week Dr. Sam & Dr. Fran discuss a classic psychological thriller, The Silence of the Lambs. This movie may have won a ton of awards, but would they win one for their portrayal of psychological themes?
This week, the doctors are joined by an expert in forensic psychology—Dr. Adam Coffey. The doctors discuss serial killing, psychopathy, and whether the two are related. Dr. Adam also gives an introduction into forensic psychology and the “CSI effect.” And finally, we all know Hannibal as a psychopathic cannibal, but does he meet criteria for psychopathy? We play Diagnosis Bingo to find out!
You don’t want Hannibal Lecter in your head, so pour yourself a nice glass of chianti, serve up some fava beans and listen to this week’s session!

Serial killer –  someone who commits a series of murders, often with a period of time between murders and committed upon unknown victims

Severe mental illness  –  a mental disorder characterized by serious impairment that interferes with multiple life domains; examples may include schizophrenia or other psychotic disorders or severe forms of other mental disorders

Forensic psychology  –  the intersection between psychology and the law; the practice of applying the science of professional psychology to matters of the legal system

Incompetent to Stand Trial  –  refers to the state of mind of the defendant during criminal proceedings (not at the time of the crime); when a defendant is unable to understand the charges brought against them or coordinate with their attorney to establish a defense

Insanity  –  legal finding (not a psychological term or diagnosis)

Grandiose sense of self –  unrealistic feeling a sense of superiority

“Fledgling psychopaths” – a term used to describe a child with impulsivity, hyperactivity, and behavior problems that are hypothesized to predict psychopathic traits

Interested in diving deeper into the history of criminal profiling at the FBI? Check out this article (or watch Mindhunter on Netflix for a loose portrayal).

Looking for more information on the serial killers that inspired the characters in The Silence of the Lambs? We recommend Last Podcast on the Left!

Read more about what defines and drives a serial killer here

Ever wonder why we are drawn to true crime and media portrayals of serial killers?  Learn more in these two articles.

Our guest, Dr. Adam Coffey, shared some great resources on today’s episode!  He recommends this resource to learn more about what psychopathy is and where it comes from

And be sure to check out Dr. Adam’s research on the relationship between psychopathy and rule violating behaviors in a community sample!