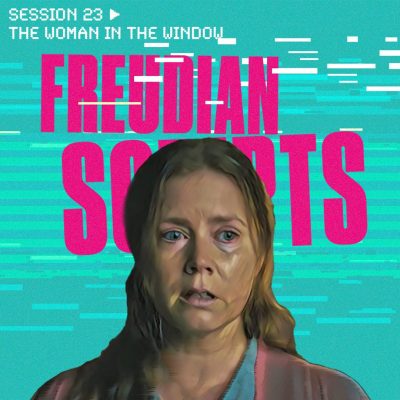 In Session with “The Woman in the Window”

This week, Dr. Sam and Dr. Fran are unravelling Netflix’s new film, The Woman in the Window.

In an interesting twist, we put a child psychologist, Dr. Anna Fox (played by Amy Adams) on the couch. With a game of Diagnosis Bingo, we break down the criteria for a new anxiety disorder— agoraphobia. What keeps Dr. Fox locked inside and are her symptoms consistent with this often misunderstood diagnosis?
Finally, we look through our telephoto lens to take a closer look at her panic attacks and history of trauma. In the biggest twist of all, is it possible Dr. Fox might better meet criteria for panic disorder or PTSD than she would for agoraphobia?
Are you listening to a podcast right now? Do Dr. Sam and Dr. Fran exist at all? Twists abound. But we guarantee you’ll rate this episode five stars.
Content warning: trauma, depression, suicide

Agoraphobia – an anxiety disorder characterized by the fear of being in a situation without being to escape, often associated with fear of being outside alone or being in crowded places

Hypervigilance – state of increased alertness and awareness of one’s surroundings, ofter characterized by being on high alert or on edge

Dissociation– lack of connection between thoughts, memory, and sense of identity

Safety items/behaviors – items or behaviors used to prevent a feared outcome, may give a temporary sense of relief from anxiety

If you or someone you know is struggling with or at risk for suicidal ideation and/or self-harm, you can get help by calling the National Suicide Prevention Lifeline (Hours: Available 24 hours. Languages: English, Spanish) 1-800-273-8255.

We discussed a new diagnosis on the podcast today! Learn more about agoraphobia here.

We also highlight the gold standard treatments for agoraphobia including, Exposure and Response Prevention (ER/P).

Dr. Fox potentially presents with symptoms of other disorders, including panic disorder and PTSD. Learn more about differentiating PTSD and agoraphobia in this article.