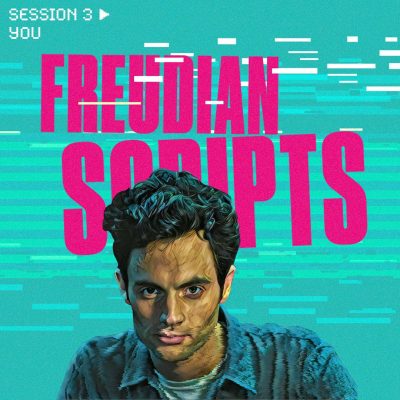 In Session with “You”

Have you been stalking Freudian Scripts? How appropriate! This week Dr. Sam and Dr. Fran analyze their first TV show, following Joe Goldberg as he, um… “falls in love” and becomes infatuated with Guinevere Beck in the first season of Netflix’s, You.

In this week’s session, we discuss stalking as Joe tries to prove his affection for Beck. We learn more about two personality disorders—antisocial and narcissistic personality disorder. And Dr. Sam and Dr. Fran diagnose Joe by introducing a fun, new game! We promise it’s more thrilling than flipping through the pages of the DSM.

Listen and play along as we get to the bottom of the questions you have about Joe, including the one Beck and all fans of the show are dying to know—is Joe a psychopath? What is a psychopath? And… seriously, what is wrong with Joe?!

Are you still reading this? Jeez, you really are obsessed.

Psychopath (not a formal diagnosis) – a pattern of disregard for the rights of others, often characterized by a lack of empathy, pathological lying, and reduced emotional responses

Sociopath (also not a formal diagnosis) – also considered to be a pattern of disregard for the rights of others, but more likely to be characterized by impulsivity and violent outbursts

Personality disorder – a pattern of thoughts, feelings, and behaviors that differ from the norms of the overall culture

Grandiosity –  an unrealistic sense of superiority over others

If you want to learn more about the difference between psychopaths and sociopaths read this brief article and this more detailed, academic article

See what actor, Penn Badgley, had to say about his portrayal of Joe on Twitter and during interviews on The Today Show and The Late Show