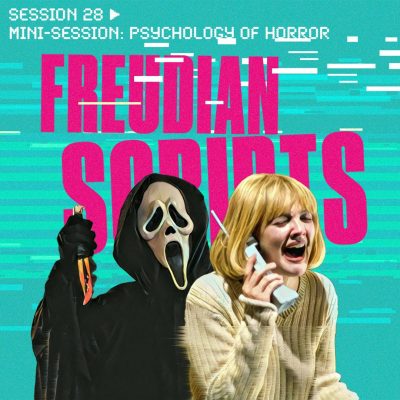 In Mini-Session with the Psychology of Horror

Join Dr. Sam and Dr. Fran this week for another Reel Rounds Mini-Session! The doctors are launching this year’s Spooky Session Series by ’rounding’ on the psychology behind why (some) people enjoy horror movies.

They break down what makes a scary movie. What types of emotions and physical reactions are usually connected to horror films? They also dive into who likes to watch scary movies. We’ll give you one clue: not Dr. Fran! But, do you lack empathy or are you just very imaginative if you enjoy the horror genre? Finally, they try to explain and give some background as to why we find horror films to be both scary and enjoyable. In doing so, we chat about famous horror flicks including Scream, Jaws, Saw, and more.
What’s your favorite scary movie?

Excitation transfer theory – theory that argues that we derive our enjoyment of horror films from the feeling of suspense followed by a threat (i.e., the suspense) being resolved

Physiological arousal – physiological reactions, such as increases in blood pressure, rate of respiration, and heart rate

Want a deep dive into the research examining the psychology behind why we like horror? Check out this review article and this TED Talk!

Check out the scene that traumatized Dr. Fran as a child from The Great Mouse Detective